A caricature of English actress Hayley Atwell, done for a challenge at Wittygraphy

For those who don't know who she is (which appears to be most people), she's appeared Woody Allen's Cassandra's Dream; alongside Keira Knightley in The Duchess; in TV miniseries such as The Prisoner, The Pillars of the Earth and Any Human Heart; and will be seen later this year in Captain America: The First Avenger. 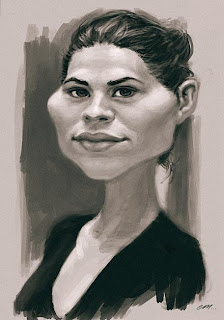 I belong to the rank of most people lol but it doesn't really matter because I can just admire your style and technique whoever you portray !

very nice, recognized the face but not the name. Great style as usual, looks very non-digital.

Beautiful sketch Euan...still anticipating the "Painter" tut from you ;)

Thank you all very much.

I'm not happy with this myself - I like the finish, but the likeness is lacking.