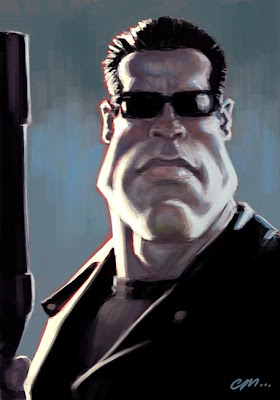 A couple of caricature sketches of Arnold Schwarzenegger and Robert Patrick as the T-800 and T-1000, respectively, in the first two Terminator movies. 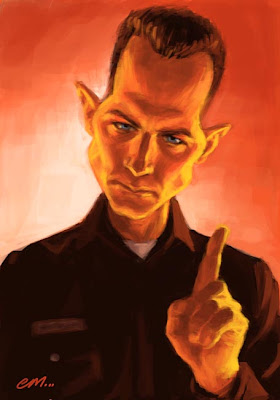 Great! Both came out good.
Like the red halo on the Ahnold Terminator.

To be honest, doing the Arnie Terminator kind of bored me, as I've seen about a million caricatures of him as that character, and they are all quite similar.

It was the Robert Patrick T-1000 that I really wanted to do, and specifically the finger-wagging moment.

I had intended carrying on the series, but just couldn't get a handle on Kristanna Loken from T3.

both great! Em!
but instead of Kristanna i would like to see Cameron/Summer Glau with half face ripped off! it would be great!
bye... Vince

I will probably have a go at Summer at some point, maybe on her terminator guise, or maybe as she was in Serenity/Firefly