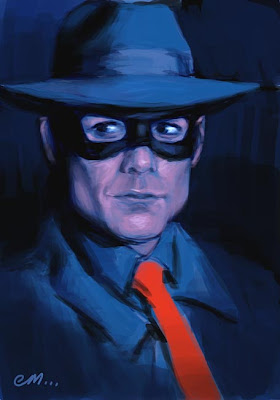 Didn't see that movie, it didn't get good reviews.
what's your take?

I thought the movie was okay. Not great, but not as bad as a lot of people seem to think it is. A lot of people also seemed to have made their minds up to hate it long before it came out.

It depends on what you go in expecting, perhaps. If you want to see exactly Will Eisner's Spirit as it is in the comics, then you'll be disappointed.

I went in expecting something different than that and, knowing that Frank Miller had written and directed it, I knew it would be very much in his style.

What I do see as a problem, though, is a disparity between the visual style and the tone of the story. The movie is actually quite light-hearted (like the Eisner strips), but it's filmed like noir. If it had been made using bright, saturated colours, like Warren Beatty's Dick Tracy movie, I think it would be better.

But, in that case, it probably wouldn't have been made at all. The only reason Frank Miller was allowed to do it in the first place is because of the success of Sin City and 300, so the studio would likely have been wanting something that looked a bit like those movies. I doubt he'd have been given any money at all if he said he wanted to do a candy coloured, breezy, fun movie.

The other main problem is too much of Samuel Jackson overacting horrendously and annoyingly. Edit as much of him out, and the movie would improve by a lot.


But then, I like Ang Lee's Hulk movie (except for the ending, which is pretty incomprehensible) because I went in expecting an Ang Lee movie, and not the TV series.

Thanks those are some thoughtful observations. I don't think there's anyway to get around making the thing look noir, since so much of what The Spirit strip is about is the noir appearance of the thing.
I personally never thought it was a property suited for live action.

Actually a Bruce Timm/WB approach would be perfect!