The third in a series of caricatures of famous Scottish people, actor Ewen Bremner.

Probably best known for his portrayal of the character Spud in Danny Boyle's movie version of Irvine Welsh's Trainspotting, Ewen has also appeared in movies such as Black Hawk Down, Pearl Harbor, Snatch, Judge Dredd and Alien vs Predator.

For someone who pretty much looks like a caricature in real life, he was surprisingly difficult to capture. My first sketch actually made him look more average than he does (kind an anti-caricature), and while my second attempt was better, it still wasn't quite there.

Luckily, it all came out okay in the end with the final rendering. 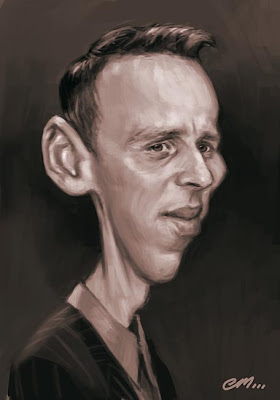 just some really appealing shapes you pulled out of this one